December 2019 marked the fourth month in a row where the XPS Pensions Group (XPS) Transfer Value Index fell, but the number of members taking a transfer value rose, according to XPS’s Transfer Watch.

XPS Transfer Watch monitors how market developments have affected transfer values for an example member, as well as how many members are choosing to take a transfer.

XPS’s Transfer Value Index fell from £241,700 at the end of November to £238,800 at the end of December 2019, with the movements being driven by increases in gilt yields over the month.

“2019 has been a turbulent year for transfer values, although November and December were two of the most stable months of the year. Surprisingly, the General Election did not have a significant impact on transfer values, perhaps as the market had already anticipated the result.”

“Throughout 2019 Brexit dictated the direction of travel for the Transfer Value Index as confidence in the UK government fluctuated, impacting gilt yields. The index hit its lowest value of 2019 (£232,100) on 17 January, shortly after Theresa May’s withdrawal agreement was voted down in the largest House of Commons defeat for the Government in 100 years. It remained low for some time until, on 21 March, the EU agreed to delay Brexit, resulting in the biggest rise of the year for the index (2.9% over two days). The political uncertainty over the summer led to lots of volatility as gilt yields fell, with the index hitting its highest value ever on 3 September (£260,400). The day after, a bill to block a no-deal Brexit passed its first vote in the House of Commons, prompting a rise in gilt yields and the following two days saw the biggest fall of the year in the transfer value index (-4.6%). This volatility shows no signs of abating with Britain due to leave the EU on 31 January.”

XPS’s Transfer Activity Index recorded an increase in the number of transfers completed in December, to an annual equivalent of 0.91% of eligible members, up from 0.81% in November. This means that, over the course of 2019, 0.96% of eligible members transferred out of pension schemes administered by XPS, remaining broadly at the 1% level seen in recent months but representing a significant fall from previous years.

2019 has been a busy year for developments in the pensions transfer market through regulation and an increased focus on pension transfer advice. Key market news included:

In April a voluntary code for financial advisers developed by the Personal Finance Society was launched to improve the quality of pensions transfer advice and there are now over 1,000 transfer practitioners signed up to the standard.

As part of The Queen’s Speech we saw the reintroduction of the Pension Schemes Bill 2019-20, originally put forward in the Queen’s Speech of 14 October 2019. This includes further safeguards against pension scams for members of defined benefit pension schemes. 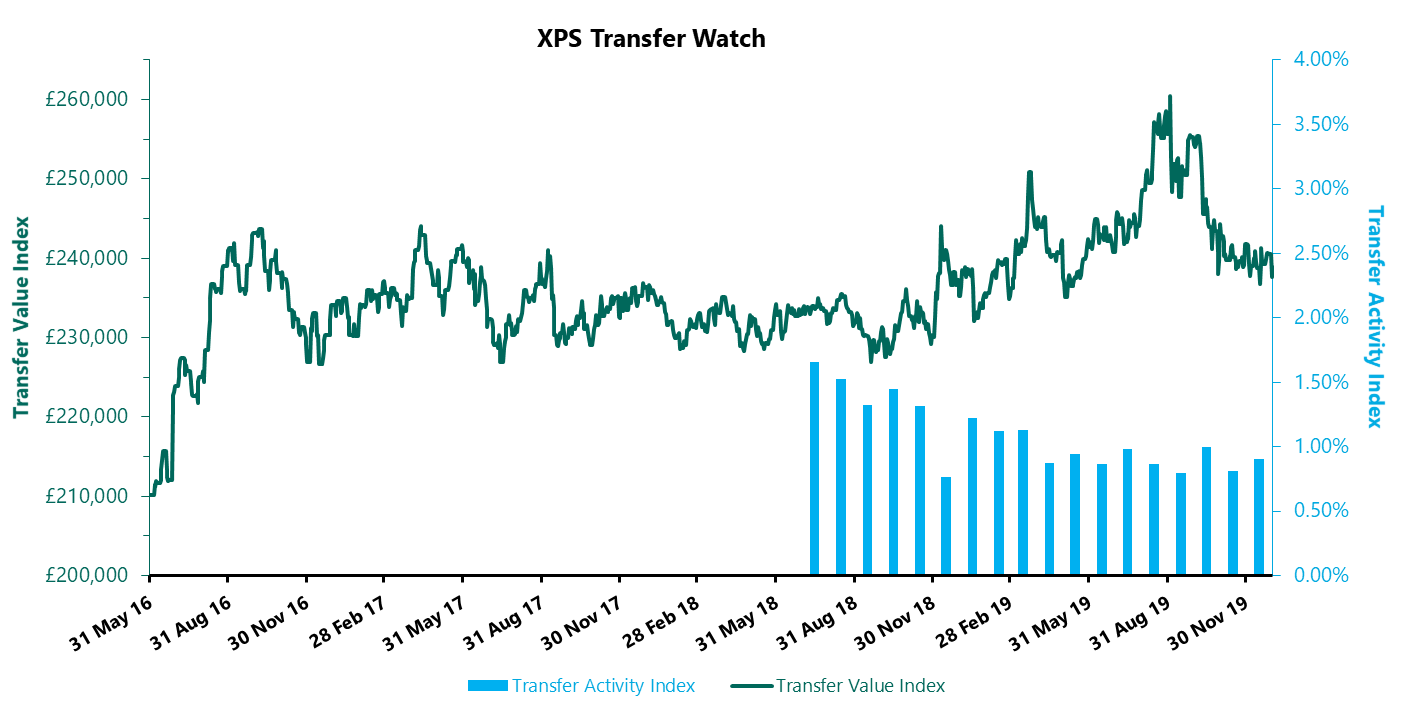 “2019 has seen a good amount of progress to improve outcomes for those members choosing to transfer out of their DB scheme. The Pensions Transfer Gold Standard was a great first step and it is encouraging to see so many advisers now adhering to its principles. The FCA’s consultation and the Pensions Bill 2019-20 will bring big changes to the industry in 2020. Combining this together with the actions many trustees and sponsors are taking, will hopefully make 2020 a breakthrough year for improving member outcomes.”

Back to press releases

Keep up to date with our latest news and views including pension briefings, XPS insights, reports and event invitations.